Posted by Alex Murdoch on April 15, 2014 in Changing the world, Feminism and Gender, Leadership |No Comments 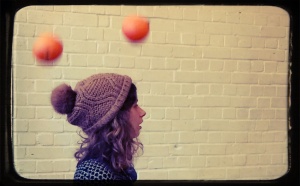 I’m cooking up a project called Birdhouse.  It’s not a show, it’s a practical thing, a support framework.  It connects the thinking about the small un-noticed stuff we found about women in Permission Improbable – with the idea of leadership in the arts for the independent theatre makers.  It’s at a pilot stage right now – find out more on the Birdhouse page and watch this space.

With Improbable I hosted an Open Space (D&D) in November at Camden People’s Theatre called ‘The Independents – how do we support women making new theatre?’.  We invited independent female theatre makers, those mavericks on the outskirts, those ones pushing boundaries and not supported by working in big institutions to have a conversation – is your creative freedom enough to sustain you?

Since then Oval House supported two Birdhouse days.  We’ve did work on communication, listening, having difficult conversations, action learning, coaching and setting goals – all stuff that would be on the cpd training itinery of someone working in a funded institution – and entirely inaccessible to independent theatre makers.  It’s not got a specific feminist agenda – but that stuff comes up about permission and taking up space – and when it does we notice it.  And it’s kind of nice to be doing this work without the guys – someone described it as a sisterhood.   There will be sub-tribes within it –  Matilda Leyser is setting up a group called ‘Mothers Who Make’ within Birdhouse that aims to support theatre makers who have children or can’t have or don’t want to have.  At the heart of the Birdhouse though, and the thing that might make it sustainable, is that everyone’s encouraged to teach something they’re expert at for 20 minutes.